City Leaders must take action following the City’s commitment to making structural changes to the Grand Rapids Police Department. We recognize that policies must be thoroughly vetted. We also know actions can be taken immediately while policies are being created and reviewed.

Today, we are releasing a spectrum of progress. Included below is a graphic that outlines where City Leaders currently stand on taking action. Currently, no official has initiated action (Green). Mayor Bliss and four commissioners have made statements in support of the changes (Yellow). Two commissioners have made no public statements or provide comments regarding the change (Red).

We have included a template if you wish to email City leaders. Template for contacting City Leaders (Copy and Paste:)

Hi ___________ (City Leader’s Title/name)
My name is _____________. I am contacting you to learn more about your stance on funding the Office of Oversight and Public Accountability as a first tangible step to creating systemic change in the Grand Rapids Police Department. I realized that you have made a commitment to making change, but I would like to know if you plan to support a vote to move forward with reallocating funds from the GRPD budget to the Office of Oversight and Public Accountability. The national average is 3% and as a resident and constituent, I would like to see the City of Grand Rapids reach the minimum national standard and exceed it. Thank you, (Name) 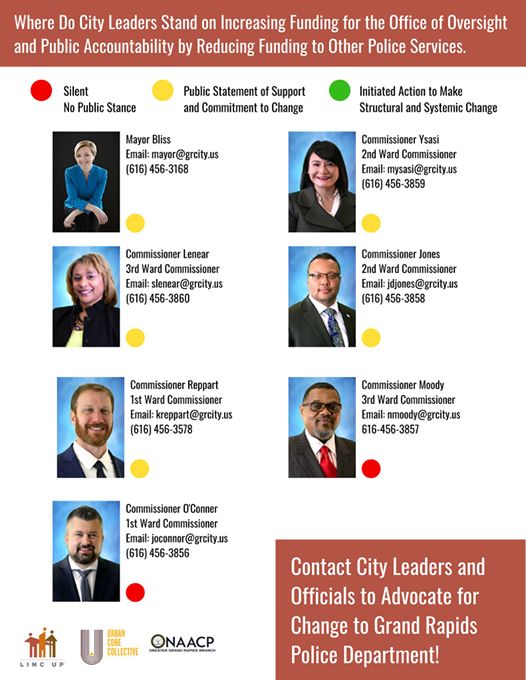 Obama: In Pursuit Of A More Perfect Union

The Danger Of Surveillance Technology